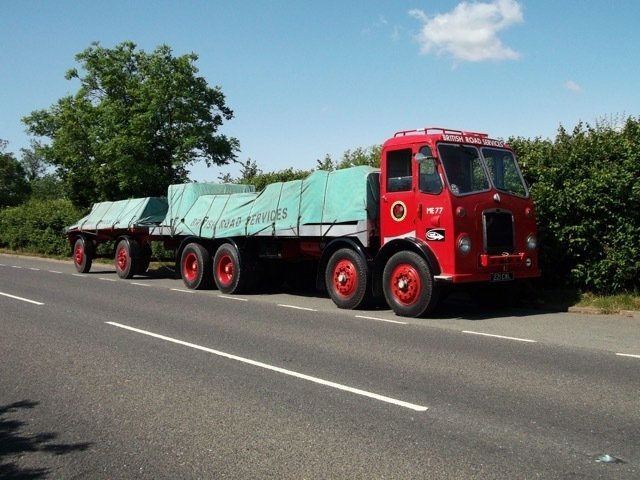 After ’57 'years, ‘BRS’ is coming back to St.Helens with the actual lorry and trailer, as in the picture, returning to the town, if any ex employees or St. Helens people or anyone else wishes to see the arrival please feel free to come to the museum and witness the arrival of this excellent piece of local history. Unfortunately due to the COVID 19 situation, we will not be open to the public on the Sunday, but we will be open for the month of August on Saturday’s only and we are hoping to have possibly one or two more BRS visiting lorries as well for the arrival.

Originally F. Davies & Co. Ltd. which was started by the late Fred Davies in 1918 at the end of WW1, were looking for backloads from the Evesham / Worcester area to the North West and were offered work from the Evesham area to Liverpool and Manchester with Fruit and Produce. This became a nightly Trunk service with 8 lorries every night doing the night trunk with four lorries each way, four northbound and four southbound.

For hauliers, the fruit and veg traffic was a very lucrative and profitable traffic, as the carriage of perishable produce was charged per package and large loads left the Vale on a nightly basis, and generated good profits for the hauliers.

Davies and Brownlow were by then a well-established company in St. Helens and they realised that there was a good reason to establish a regular nightly trunk service from Evesham to Liverpool and Manchester fruit markets and so a link was formed to transport the goods from Evesham on a nightly basis, which was apparently to last for some forty years. The lorries were loaded for Liverpool and Manchester markets, and the trailers were loaded with goods for other destinations, for instance the Liverpool bound lorries would unload the trailers at Stoke, Burslem and Newcastle-Under-Lyme and then make their way via The Poplars Transport Cafe to Liverpool fruit market.

On some nights as required, an Evesham driver would change over with a St. Helens driver at Arclid in Cheshire, and it was rumoured that the residents of Offenham made the best home made wine in Cheshire, when a certain driver was running sugar Northbound from Bristol on the Arclid changeover service!

The night trunk even in winter, was always busy when out of season with other general traffic such as moving all kinds of goods from places such as Liverpool and Manchester docks to down South and loads from South to North from such places as the car factories in Coventry and Birmingham to the docks at once again Liverpool and Manchester for export.

Once in the market the St. Helens shunters would relieve the Evesham men who would then use the van to go their ‘digs’ in Dentons Green Lane in St. Helens.

When BRS nationalised the majority of private hauliers after WW2, Davies and Brownlow were taken over by BRS, when in the winter there was a reduction in traffic southbound, BRS had a lot of traffic from the operational Burtonwood American air base to bases such as Brize Norton, Upper Heyford and Croughton who then continued the night trunk service for some years. In 1953 the Evesham depot was sold off after de-nationalistion and Fred Davies apparently took over the running of the trunk service to the North West once again, until 1963 when the BRS depot at Sherdley Rd. finally closed, which incidentally is now the St. Helens Ford Dealership.

Although Fred Davies is no longer in transport, the warehousing business which was formed in 1972 is still going strong in St Helens thus ensuring that Fred Davies’ name is still around in the town after 102 years; which is very fitting as Fred himself lived to the grand old age of 101!

On Sunday the 9th August at approximately between 12 and 1pm the lorry will be arriving at the North west Museum of Transport in Hall St. St. Helens, after re-creating the original night trunk service from Evesham to St. Helens, the run will use ‘The Old Road’ meaning that the lorry will come to the museum on as near as is possible the way that it would have come in the past years of no motorways at all, it will stop at Midway Truck stop at Whitchurch for a well earned break, and will then arrive at the museum between 12-1pm, where it will become a permanent resident at the museum for all to see as a memory of ‘Days Gone by’ if any visitors wish to recall any memories of Fred Davies Ltd., or BRS days please feel free to inform us as it is all the history of Fred Davies Ltd. and BRS.